Pop up tents have a huge appeal as they are easy to put up, and they are very portable. But these shelters hide a dirty a little secret that I didn’t notice before buying one…they are near impossible to get back into the bag! I looked at the manufacturer’s instructions for how to fold up a pop up tent, and I was still confused. I spent close to an hour trying to figure it out in the dining room, with my wife giving me pitying looks as she walked past.

Then I found a video with a old Asian woman who gently Tai-Chi’d her pop up tent back into the bag. Armed with better knowledge after a couple more tries I had it ‘in the bag’. So, if you would like to save yourself much frustration and anguish, read on!

How To Fold Up a Pop Up Tent (Step-by-step)

Folding a pop up tent video

I have broken down the steps of the whole re-packing process in the video below, or you can follow the steps laid out in the subheadings below.

Do future-you a favour and give your shelter a brush down to get rid of any sand or dirt. Some pop up tents are small and light enough to just pick up and shake, otherwise a dust-pan and brush will work. Wind is not your friend during this process, and in these situations it really helps to have another person to hold things down. If you’re by yourself, then move some weighty objects close to hand to help pin things down in windy conditions.

Bring the sides of your tent together so that it is flat. There will generally only be one way that the shelter can be pressed together in a symmetrical way. If it resists the way you are folding it, or it looks a really odd shape, try pressing it flat along another axis. If these words don’t make sense, have a look at the diagram below.

Step 2 – Start folding in half

With a knee on one end, bring the opposite end towards you, along the axis shown in the diagram below.

Step 3 – Fold over to create circles

Roll the end coming towards you under itself, and as you do so you’ll notice that a couple of circles form. Gather these circles together so they sit on top of each other.

Slide the collapsed tent into the carry bag, and watch everyone’s jaw drop as you walk off the beach having just completed the impossible.

Other pop up tents

If you have a pop up camping tent (as opposed to a simple pop up tent), the concept is very similar except that you want to form a burrito shape, and then bring the two ends together which naturally fold into circles. Have a look at this chap showing his tent who is boss.

Alex's passion for the outdoors led to him pursing a career in geology (rocks and stuff), where he could be out and about in nature. He has now spent years working and playing in the outdoors. He has sampled a broad range of adventure activities but his favourites are camping, biking, trekking, and discovering secluded beaches. He now balances time at work to enjoy the outdoors with his young family, and sharing his knowledge and experience through his writing. 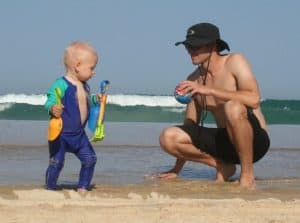 To help find products that will help you, family and friends unwind, unplug and recharge
More about us